On this day we commemorate the martyrdom of St. Menas (Mina) who was called the blessed faithful. His fat 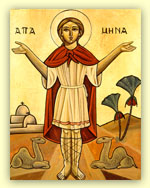 her Eudoxius was a native of the City of Nakiyos and was its Governor. His brother was envious of him and he brought charges against him before the Emperor. The Emperor transferred him to Africa and appointed him Governor over it. The people were pleased with him because he was merciful and God-fearing. His story is as follows.

His mother Euphemia had no children. One day she went to church on the festival of Our Lady the Virgin Mary, Mother of God, at Attrib. She saw the children in the church wearing their beautiful apparels with their parents. She heaved a sigh and wept before the icon of St. Mary, entreating her to intercede for her before her beloved Son in order that He would give her a son. A voice came from the icon saying “Amen”. She rejoiced in what she had heard and realized that the Lord had heard her prayers.

When she returned to her home and told her husband, he replied, “May God’s will be done”. The Lord gave them this saint and they called him Mina, from the word “Amen” which his mother heard coming out of the icon. Later on, his parents got another son and a daughter.

When he was growing up, his parents taught him how to write and they reared him in a Christian manner. When he was eleven years old, his father departed after a good old age and his mother died three years later. St. Mina devoted his life to fasting, prayer and a Christian way of life.

Because of everyone’s love towards him and his father, they placed him in his father’s position. In spite of that, he did not forsake his worshipping.

When Diocletian had renounced Christianity and issued orders to worship idols, many were martyred for the name of the Lord Jesus. The Saint left his position and went to the desert, where he stayed and worshipped God with all his heart. 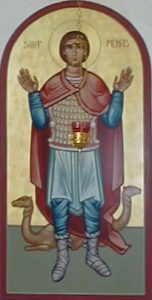 One day he saw the heavens open and the martyrs crowned with beautiful crowns. He heard a voice saying: “He who toils for the name of the Lord Jesus shall receive these crowns”. He returned to the city over which he was Governor and confessed the name of the Lord Jesus. Knowing that he belonged to a noble family, they tried to dissuade him from his faith and promised him honour and precious gifts. When he did not change his mind, they threatened him and the Governor ordered him to be tortured. When the Governor failed to turn him away from his faith, he sent him to his brother so that he might influence him but he also failed. Finally, the Governor ordered his head to be cut off, his body to be cast into a fire and his ashes to be scattered in the wind.

The body remained in the fire for three days and three nights, but it was not damaged. His sister came and gave the soldiers a lot of money and they let her take the body. She put it in a sack and intended to take it to Alexandria, as her brother had previously advised her. She embarked with her brother’s body on one of the ships to Alexandria. On the trip sea beasts came out of the water and attacked the passengers abroad the ship. They were frightened and screamed with fear. The Saint’s sister prayed to the Lord and asked for the intercession of her brother. While the passengers were in fear and confusion, fire went forth from her brother’s body and burned the faces of the beasts. They dove immediately into the water and as they reappeared the fire burned them again. They finally dove and did not reappear.

When the ship arrived at the port of Alexandria, most of the people in Alexandria went out with the Patriarch to meet it. They carried the sacred body with honour and reverence and entered the city with a venerable celebration and placed it in the church, after they shrouded it in expensive shrouds.

When the time of persecution ended, the angel of the Lord appeared to the honourable Patriarch, Abba Athanasius the Apostolic. The Lord’s command was to place the body of St. Mina on a camel and to take it out of the city without letting anyone lead it but to follow it from a distance until it stopped at a place that the Lord had designated.

They walked behind the camel until they arrived at a place called Lake Bayad, in the district of Marriot. There they heard a voice saying: “This is the place where the Lord wishes the body of his beloved Mina to rest”. They lowered the body and placed it in a coffin, and situated it in a beautiful garden and many miracles happened through the body.

After a while, the people of Pentapolis (the five cities) rose against the cities around Alexandria. The people were getting ready to face the Barbarians and the Governor decided to take the body of St. Mina with him as his strong protector. He took the body secretly and through the blessings of this Saint, he overcame the Barbarians and returned victoriously.

The Governor decided not to return the body of the Saint to its original place and wanted to take it to Alexandria. On the way back, they passed by Lake Bayad, St. Mina’s original place. The camel carrying the body knelt down and would not move, in spite of frequent beatings. They moved the body over another camel, but again this second camel did not move from its place. The Governor finally realized that this was the Lord’s will. He made a coffin from decay-resistant wood and placed the silver coffin in it. He then returned it to its place, invoked St. Mina’s blessings, and returned to his city.

When the Lord wanted to disclose the location of St. Mina’s body, He did it in this manner. There was a shepherd in the desert who had a lamb with mange. It slipped down into the water of a well near the place of the Saint’s body, then came out of the water and rolled over in the sand of that place, and instantly the lamb was healed. When the shepherd saw this miracle, he was amazed. He started to take from the sand, mix it with water and smear with it every lamb with mange or any other disease, and immediately, they were healed.

The news of these miracles spread in all the countries until the Emperor of Constantinople heard of them. He had an only daughter and she was leprous. Her father sent her to the place where the Saint’s body was and enquired from the shepherd how these miracles were happening. She took from the sand, moistened it with water, smeared it on her body and slept the night in that place. In her sleep she saw St. Mina saying to her: “Arise early and dig in this place and you will find my body”. When she woke up, she was cured. As she began digging she found the body of the Saint. She sent a word to her father who rejoiced greatly, thanked and glorified God.

The Emperor then sent men and money and built a Church in that place and it was consecrated on the fifteenth day of the Coptic month of Baounah.

When the Roman Emperors Arcadius and Honorius reigned, they ordered a city to be built there. Multitudes of people came to that church asking for the intercession of the blessed St. Mina. The Lord had honoured him with many signs and wonders that appeared from his body. When the Arabs came to Egypt, some of them attacked the city and the church was destroyed, only its ruins remained.

When His Holiness the late Pope Abba Kyrillos VI was ordained Patriarch, he took interest in building a large monastery in this area of Mariut in the name of St. Mina. He spent a great deal of money in building it. There are two churches in the monastery, visited by many Coptic worshippers for blessings and for praying. He also bought one hundred acres of land and built a fence around it. He ordained a number of monks who had high degrees of academic and religious education.

May the intercession of St. Mina be with us. Glory be to God forever. Amen.

Also from the Coptic Synaxarium for the 15th Day of the Blessed Month of Paoni: The Consecration of the Church of Mari Mina at Mariut

On this day is the commemoration of the appearance of the body of the honourable saint, and great martyr Mari Mina, and the consecration of his church at Mariut (Mareotis).

Now, the body of this saint was hidden, and the Lord wished to reveal it. It came to pass that there was a shepherd, who pastured his sheep near the place where the body of the saint was buried. One day, one of his sheep, which was sick of a skin disease (mangy), dipped itself in the water of a pond which was near that place. It then went out of the water, and rolled itself in the sand of that place, and it was healed straightway. When the shepherd saw this wonder, he marvelled, and took the sand of that place and mixed it with the water of the pond. He smeared every mangy sheep, or any that had a deformity, and they were healed immediately.

The report of this shepherd became widespread in all the regions of the empire, until the emperor of Constantinople heard of it. He had an only daughter who was leprous. Her father sent her there. She questioned the shepherd about how she could get rid of her illness, and he told her. She took some of that sand and mixed it with the water. She retired to her quarters and smeared her body with the mixture and slept that night in that place. She saw in a dream St. Mina and he told her, “Rise up early and dig in this place and you shall find my body.” When she woke up from her sleep, she found herself healed. She dug in that place, and she found the holy body. She sent to her father to inform him about what had happened. He rejoiced exceedingly, thanked God and praised His Holy Name. He sent men and money and built a church in that place which was consecrated on this day.

When Arcadius and Honorius reigned they ordered a city to be built there which was called Mariut. The masses came to this church interceding with the blessed Mari Mina. God had honoured him by the miracles and wonders(1) that were manifested from his pure body, until the Moslems occupied the city and destroyed it.

The biography of this saint is mentioned under the 15th day of Hatour (see above).

May his intercession be with us and Glory be to God forever. Amen.